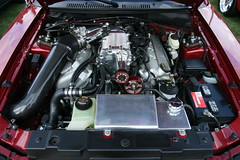 Question by Justin R: 1998 Ford Mustang “Diagnostic Question”?
Here’s the deal. I have a 98 mustang with 82000mi MINT condition. It was owned and maintained by my mother from
18000mi. Recently when going about 45 mph it tends to “shudder” (not vibration but as in “missing” in the engine. Like its not getting fuel). This only happens at a VERY LOW throttle (like BARELY pushing to remain at a constant speed on flat ground). The other day it threw two codes (check engine light) for bank 1 and 2 LEAN. I find it hard to beleive they both went bad at the same time. So I had them cleared to see if it would reappear. They have not. I replaced the Fuel filter and it seemed to get better for about 2 weeks. Now its doing it again and it hasn’t thrown a code.(it took weeks of driving it before with the shudder b4 throwing a code).

So my question is I have called ford and asked how much a diag would be and they said that if there is no codes its useless. How and where can I get a COMPLETE diagnostic done or is that even possible without the CEL on? SEE MORE
I have recently replaced the air filter, checkd for vacuum on the PCV valve, I have changed the tranny fluid and filter (but this problem was the same before and after), replaced the spark plugs, flushed the coolant system, I only use synthetic oil, I must reiterate…. Except for the fact that the tranny filter had never been replaced this car was meticulusly (spelling?) taken care of by my mother and I do the same. It looks brand new and doesn’t even have a little oil leaking or anything leaking for that matter. Is there something I missed. Ohh and I have replaced all the brakes too (all done by me, i was a Nuclear Mech in the navy)

I need to know where I can take it that doesn’t cost an arm and leg to diagnose. So is there a machine that can be hooked up (via OBD!! port?) that can run a diag and not just read the CEL codes?

I just need to know how I can get this resolved before it damages something.

Side note: Do v6 mustangs have really noisy lifters/injectors?
Last one I swear.

I have an OBDII cable I used to use to read the engine parameters when racing my VW GTI Turbo.

Does anyone know of any programs available that a person could get to use that cable and hook it up to my mustang to see the “workings” ie Fuel curve, A/F ratio, timing, temps.. etc…? That would help me figure this out. Thanks for looking.
I have already changed the tranny filter and fluid without a change.

The car has “almost died” on me once. It started right back up though.

IS IT POSSIBLE TO HAVE NO “CEL” ON AND TAKE IT SOMEWHERE AND HAVE THEM RUN A DIAGNOSTIC AND BE ABLE TO FIGURE OUT WHAT’S WRONG? WITHOUT COSTING AN ARM AND A LEG?

Add your own answer in the comments!